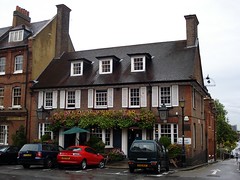 The Olde White Bear was a pub in Hampstead. It closed in October 2009.

It reopened in March 2010 as the Old White Bear, under new management and with a very different focus from before.

The information below is retained for people who want to know what it was like as the Olde White Bear.

There are six handpumps, which according to the 2009 Good Beer Guide serve "a constantly changing range of up to six beers". This was certainly bourne out by our two weekday visits in September 2009; at the start of the month they had Springhead Ginger Pig (£1.60/half), Wadworth Henry's IPA, Meantime LPA, and Brains SA Gold; while three weeks later they had the LPA again (£1.60/half) plus O'Hanlons Yellow Hammer (£3.20/pint), Maxim Samson, and Sharp's Cornish Coaster. A comment from a staff member in the BITE comments linked below suggests that they usually have four on in the week and six at weekends, and that they deliberately avoid the usual Pride, Young's, etc, in favour of less-ubiquitous options.

When Kake visited on a Wednesday afternoon at the start of September 2009, there were no other customers. Service was friendly, and jazz was playing quietly and unobtrusively. Our second visit, by Kake, Ewan, and Sarah, was on a Thursday lunchtime three weeks later. This time there were three or four other customers, and an REM CD was playing.

The food came recommended by the 2009 Good Beer Guide, so we gave it a go on our second visit. (According to the menu photo, it's served noon-9pm.) Kake had the Caesar salad with chicken (£7.75) photo, which was simple but well-executed; the lettuce was fresh and crisp, the dressing was well-balanced, and the chicken was flavourful and not dry at all. We did wonder where the croutons were, though. Ewan had the chickpea and red kidney bean burger (£7.50) photo, which was substantial and chunky.

According to a sign seen in September 2009, quiz night is Thursday from 9pm, £1/person to enter.

Accessibility: A high step up to get in.