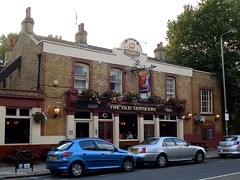 High tables surrounded by high stools are arranged by the front windows, and more tall stools line the bar. There's plenty of normal height seating as well, though, including a few sofas at either end of the room. A fireplace is set into the wall at one end, but appears not to be in use as it has a padded seating rail around it. There's at least one flatscreen. More seating is available upstairs in the John Young Room, which can also be booked out for functions. There's an extensive beer garden out the back, and a few picnic benches out the front.

Three handpumps sit on each side of the central horseshoe-shaped bar; it's not easy to see the clips when the place is full, but there's a small blackboard on the front of the bar which lists the available ales. Also on the bar is a "dog menu" of various dog treats, with proceeds going to charity.

There were quite a few people in when we arrived around 6:30pm, and it filled up more during the evening, though never became unpleasantly crowded. There was a good buzz of conversation going on, almost entirely drowning out the fairly quiet background music. Service was helpful and friendly even though they were quite busy.

According to the Young's website as of September 2012, food is served noon-3pm and 6pm-10pm Mon-Fri, and either noon-9pm or noon-10pm Sat-Sun (the wording is ambiguous). On the evening of our visit the chef was away at the Morning Advertiser Great British Pub Awards (in which the Old Sergeant won Best Community Pub), so the food was restricted to burgers, steaks, and sausages from the barbecue, all served with potato salad and mixed salad.

Bison steak (£10) photo was a little chewy, though this was probably at least partly because bob had asked for it as rare as possible. It was a decent size for the price. Vegetarian sausages (£6) were OK, standard meat substitute type, served in a low-quality and overly crumbly white roll. The potato salad was very good; new potatoes in a creamy dressing perked up with slices of gherkin. The mixed salad was also good, nicely dressed and including paper-thin slices of raw mushroom.

They have free wireless via The Cloud; you just need to register (and the system happily accepts junk data). In September 2012 this worked fine for us using an account previously registered in a Wetherspoons.

According to a sign seen in September 2012, quiz night is Monday from 8:30pm.

Kake's verdict: I liked this pub, and consider it proof that with the right management and customer base, the Dreaded Young's Refurb need not strip a place of all character.

Child-friendliness: There's an accessible toilet which doubles as a baby-changing area. At least one highchair is available.

Accessibility: No steps to get in, and there's step-free access to the bar, ground floor seating, and ladies' toilets. As mentioned above, there's an accessible toilet (not RADAR-locked, doubles as a baby-changing area). There's a step to get to the standard gents'. Not sure about access to the beer garden.