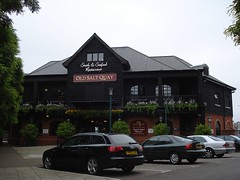 A Greene King pub on the riverside near the tip of the Rotherhithe peninsula. Previously known as Spice Island, it changed its name some time around May-July 2007. It doesn't seem to have changed significantly from the tail-end of its previous incarnation, though the pool table is no more.

The upstairs part is billed as a "steak and seafood restaurant", and a sign outside declares "families welcome". The downstairs is fairly large, with a couple of separate areas leading off from the main open-plan bar area (one of these used to house the pool table but now just has more seating). A large riverside seating area is also accessible from the bar.

Kake and doop visited on the afternoon of a Bank Holiday Sunday in May 2008. They weren't serving any food apart from the carvery upstairs, which was running until 6pm. Strongbow was £3.15/pint. doop had a coffee (provided by Coffee Republic); an Americano was £1.69.

bob visited on a Sunday afternoon in August 2009. Greene King IPA and Abbot Ale were on. I had a pint of Greene King IPA chilled (£2.80) which was not from a hand pump. It was okay.

The pub has its own car park. It also used to have bike parking (a dozen thingies to lock your bike to, under shelter) but we didn't check whether this survived the rename.

Accessibility: The front door is wide, the ground floor is all on one level (apart from a 1-2cm high step at the threshold), there's a separate disabled toilet, access to the main part of the patio is step-free, and there's a lift to the upstairs restaurant. The chairs on the patio are a comfortably large size.