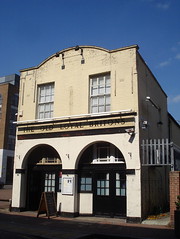 The Old Loyal Britons was a Good Beer Guide pub in Greenwich. It closed due to repossession by the landlord in October 2014.

Pub in Greenwich, in the Good Beer Guide.

It's run by the East Wickham Brewery (though we're not sure yet whether they're actually brewing on-site). It's also known as RLA's Restaurant and Bar.

It's a small building, long and narrow, but light and bright inside with cream painted walls, a south-facing front to let in plenty of sunlight photo, more windows towards the back, and spotlights on the ceiling to fill in the gaps. Furniture and bar are varnished dark wood, and worn varnished floorboards are underfoot. Upholstered stools line the bar. The overall feel is traditional but uncluttered. It opens out a little at the back, with church pew seating and art for sale the walls. The small courtyard garden has a couple of tables.

Kake visited on a Friday lunchtime in September 2014. When I arrived around 1:30pm there were four other customers in, all together, possibly a party of tourists. No music was playing.

Two of the four handpumps were on, offering Firebrand Cross Pacific Pale Ale, and Firebrand Graffiti IPA. A line of pump clips behind the bar indicated ales coming soon including Summer Perle, ELB Cowcatcher, and Westerham Audit Ale. The keg fonts had labels for Becks Vier, Whitstable Kentish Lager, and something else possibly from their own brewery, but the two last of these had glasses over the top indicating they were off. A couple of polypins from the Magic Bus Cider Co sat on stillage on the bar photo. A half of lime and soda was £1.

Food is served, though we're not entirely sure what times. According to the 2015 Good Beer Guide, they specialise in raclette. According to a notice outside in September 2014, all their meat comes from WH Wellbeloved in Deptford and all their vegetables come from The Creaky Shed on Royal Hill.

According to a sign seen in September 2014, there's an open mic night every Wednesday from 8:30pm.

Accessibility: A tiny step to get in. No steps to toilets, including the accessible one.