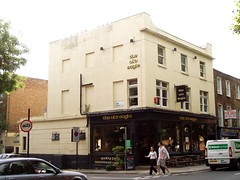 A pleasant boozer around the corner from Camden Road Station.

This was clearly once a down-at-heel locals' pub which has been given a makeover. However, there's nothing pretentious or gastro about it. The pub has an open airy feel, with a sunny beer garden area in the back, and what feels like a conservatory under a stained-glass eagle photo with comfy sofas and solid tables (and odd Tutankhamun book ends).

The beer selection itself is nothing special: there's Greene King IPA and two guest beers on pump, with a few lagers as well. They do Pimm's jugs in summer, a £5 'House Doctor' bloody mary, and hot toddies and mulled wine in the winter. They also serve Thai food.

According to their website as of November 2016, they have a pub quiz on Mondays, live music on Wednesdays, and a DJ on Thursdays; also, they are dog friendly.

Ewan's verdict: It may not be a destination for the drinks, but it goes very far with a relaxing atmosphere and pleasant surrounds, far away from the bustle of Camden High Street.