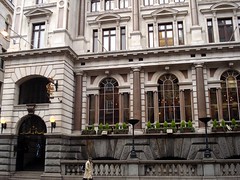 Large pub in the City. It was previously a Fuller's Ale & Pie House, but as of early 2019 is now run by McMullen's.

It has a central bar surrounded by tables, some of which are high. There is a balcony and some rooms off to the side.

When bob visited on a Tuesday evening in March 2018, nearly all of the tables were taken at 6:30pm. London Pride (£4.80/pint) was fine, and ESB and Oliver's Island were also on.

According to the Old Bank of England website as of March 2018, food is served noon-10pm Mon-Fri and noon-4pm Sat.

Acessibility info: Steps to get in the front entrance. Toilets are on the first floor.