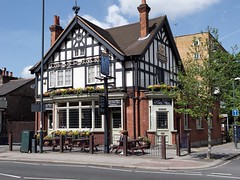 Now closed; was a pub in Twickenham. As of May 2014 it's closed and boarded up.