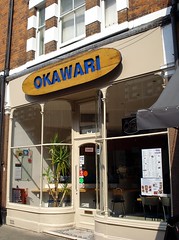 Okawari was a Japanese restaurant in Ealing. According to Google Street View, it closed down by March 2019.

Japanese restaurant in Ealing. They used to have another branch in Chinatown, but that one closed in 2010.

On the left as you enter is the sushi bar, with seats for about 10-12 people, while opposite there are a couple of four-person tables. Towards the back is a tatami seating area with tables sunk into the floor, so diners can pretend they're sitting on the floor but actually put their legs under the table as normal. The decor is pale wood, clean lines, well-lit.

Kake visited on a Thursday lunchtime in February 2009. It was relatively busy when I arrived a little after 1:30pm, but there were a few seats free at the sushi bar. It was a little tricky to get the attention of the staff, but then they did have quite a few customers to deal with.

The menu is viewable on their website. On the day of my visit there were also a number of specials written up on those little hanging things above the sushi bar, including plum and oba leaf roll (£3) and spicy octopus (£4). They also offer a range of set lunches, all priced at either £4 (e.g. vegetarian yaki soba with soup and tea; chasiu ramen with tea) or £5 (e.g. sushi and maki with salad, soup, and tea). Note though that a 10% service charge will be added to this.

I went for the sushi set lunch (£5) photo, which turned out to include four pieces of cucumber maki and four pieces of nigiri — salmon, seabass, mackerel, and cooked prawn. The salad was the only let-down; the sliced tomato was anaemic and flavourless, and the dressing was uninteresting. The sushi was good; rice and fish were both fine, and in good proportion to each other; the pieces were just the right size to eat in a single bite (something that a lot of places get wrong). Soup and tea were also fine, and my tea was refilled twice without me having to ask.

Kake's verdict: I'd come back for lunch or a quick dinner if I happened to be in the immediate area, but I'm not sure it's the right kind of venue for a longer make-an-evening-of-it type dinner.

Accessibility: One step up to get in, and I think also another step to get to the tatami area. I didn't check the toilets.