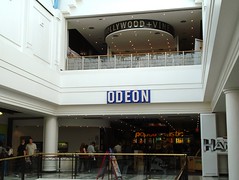 Odeon cinema in Bayswater, located on the second floor of the Whiteleys Shopping Centre on Queensway.

In late 2011 it was temporarily closed for remodelling which led to the creation of The Lounge, a "boutique cinema" area which is over-18s only and has food and drink service throughout.

According to The Lounge FAQ as of January 2012, Odeon Whiteleys still has four "traditional" cinema screens which are open to all.