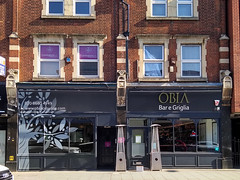 Obia was an Italian restaurant in Croydon's restaurant quarter. It has now closed.

In September 2018 a notice appeared on its Facebook page stating that it was closed for refurbishment. However, it never reopened, and by May 2019 it had been replaced with a Lebanese-Italian restaurant called Ayat photo.

It's split into two parts; entry is into a bar area with high tables and stools, and then there's a restaurant area which can seat around 40 people photo.

bob visited for a lateish lunch on a Saturday in July 2018. I was the only customer when I arrived around 1:30pm, and this remained the case throughout my visit.

I had the falafel burger (£7 including french fries) photo with added bacon (£1). The bacon was good quality. The falafel burger was interesting. It was crispy on the outside with a soft filling which had whole chickpeas in. The burger lost cohesion while I was eating it. The french fries were OK photo. I also had a side order of onion rings (£3.50) photo which were made from real rings of onion, lightly battered and slightly spiced.

I finished with a selection of sorbets (£4.50) photo. The mango sorbet was obviously made from mangoes.

Accessibility: Accessible toilet on the same level as the restaurant (as is the gents').