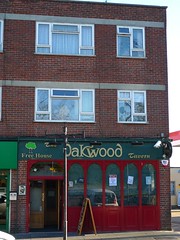 The Oakwood Tavern was a pub near Oakwood Station. According to Google Street View, it was closed and boarded up with the sign removed by March 2021.

Free house near Oakwood Station, all the way up there at the top of the Piccadilly Line. It's a fairly basic kind of pub (a one-room shop conversion on the end of a terrace next to a bookies), but our pre-Tube-Walk research suggested it was the best in the area. It's certainly not awful, but not worth much of a journey.

Kake, Ewan, and other Tube Walkers visited on a Sunday afternoon in January 2008 after a wander around Trent Park. The only real ale available was Courage Best, dispensed from a single lonely handpump at the end of the bar. A couple of flatscreens were showing sport; this was replaced by music once the sporting event was over. Two pints of Courage Best and one of Strongbow came to £7.70.

A sign on the side of the pub advertised Thai food; don't know what times it's served.

It has a few sofas, and I think some kind of beer garden out the back. There are murals of film stars on the walls; see dansette's photos.