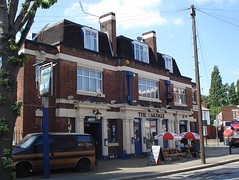 The Oakdale was a pub in Harringay. It closed for good in March 2011.

Very much into their real ale, and their single malts; they also usually have real cider. On a March 2008 visit, there were four Milton brews and one guest beer on tap; when the guest beer ran out it was replaced with another as soon as the line was cleaned. In June 2008, Old Rosie was £1.30/half and Stowford Press was £2.20/pint.

Whilst the quality of the beer is as good as its sister pub, the Pembury Tavern, the atmosphere is quite different, being far more of a locals' pub, laid out with seats (including a couple of armchairs) and standing areas for drinking, rather than tables for eating at.

Unlike the Pembury Tavern, the Oakdale Arms has a licence for music, so has a jukebox and a video projector, which on Nick's March 2008 visit was showing ITV1 (with sound) and on Kake's June 2008 visit was showing football. Nick has been told that a Wii is often also plugged into this, but hasn't seen it first hand. They do have a jukebox, and when Rob the manager (or is he still the assistant manager?) (who is a character in himself) is behind the bar it may well be playing rock/metal.

They don't do food, and on a June 2008 visit Kake got the impression that there are no plans to change this. "Authentic Black Country" pork scratchings were £1. In July 2007, a staff member mentioned in the BITE comments linked below that they're happy for you to bring in takeaways.

They have set up a sheltered area in the beer garden for smokers, following the ban, and there are also some bench/table things out the front. Free wireless; the network's named after the pub, and there's no password.