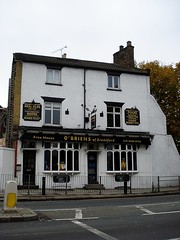 O'Brien's was a free house in Brentford. It has now closed. As of August 2015 the premises are occupied by a "bar and kitchen" called the Northumberland Arms.

Free house in Brentford. The managers also run the Plough in Norwood Green.

It's not particularly large inside, though not tiny either; there's probably seating for about 40 people. Some of the seating is tall tables and stools, though they do have normal tables as well, and a banquette along one wall. Wooden floorboards and a fairly open, clean-looking feel. There's a beer garden of some kind out the back.

They usually have four real ales on, which seem to change quite often. London Pride may be a regular; we've seen it on three visits now. In June 2009 the other choices were Weltons Hougomot (£1.40/half) and Hopback Entire Stout (the other clip was turned around). They also do real cider; on bob's June 2008 visit they had a cider and perry from the cask.

Kake first visited on a Friday afternoon in October 2007. There was a scattering of other customers, all of whom knew each other, but I didn't feel at all out of place or unwelcome. They even persuaded me to join in the conversation. My second visit was on a Tuesday evening in November 2007; same kind of clientele, apart from a small group of possibly-students (well-behaved ones though).

My most recent visit was on a Thursday afternoon in June 2009; again, everyone else seemed to know each other. Horseracing from Ascot was showing on the flatscreen, with the sound up fairly loud and playing through speakers across the pub. They kept the sound turned up between races, unfortunately, and so conversations got quite loud to match, with one chap practically shouting at the person opposite him.

Food is served noon-3pm and 6pm-9pm Mon-Fri (roast lunch served noon-4pm Sun). The food is chalked up on a blackboard, and looks like it changes from time to time. On an October 2007 visit, the menu included tomato-basil soup with crusty bread for £4, baguette sandwiches (chicken, avocado, and bacon; mozzarella and tomato) for £4.50, and a selection of main courses priced between £6 (e.g. sausage, egg, and chips; chilli con carne and rice) and £7 (pork chop with piquant sauce and rice). Kake suspects it's home-made rather than frozen-and-microwaved.

As of June 2009, the O'Brien's website advertises a quiz on Wednesdays and an acoustic jam session on Tuesdays.

Accessibility: Two high steps up to get in, though there is a grab bar.