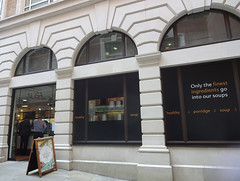 Soup-focused takeaway in a side alley near Liverpool Street Station, part of a small chain.

Inside it's really nothing more than a corridor along which customers are funnelled, from a fridge at the entrance with soft drinks, salad boxes, and fruit salads, past the service counter where soups are ladled out into tall cups, to the till at the end. Seating is limited to two slightly rickety high plastic tables with stools inside, and a similar number outside.

Although they also do a few "rice boxes", the menu is mainly based around soups, with options changing by the week. Soup prices include bread, rice, or fruit, though the selection of the latter is very limited (banana, red apple, or green apple). Dairy-free and gluten-free options are clearly marked.

Kake visited on a Wednesday lunchtime in September 2016. The queue varied from around four to around a dozen people while I was there, but moved very quickly. Music was playing, so quietly that I couldn't tell what it was. Service was as friendly and helpful as one could reasonably expect in what is essentially a fast-food context.

It was a hot day, so I chose the chilled soup option: Calcutta cucumber cooler (£4.25) photo. It was pretty good. There was a sensible ratio of liquid (yogurt-based) to vegetables (cucumber, tomato, and red onion), and all the vegetables tasted fresh, though the tomatoes were surprisingly flavourless for the time of year. The quantity of red onion was well-judged, giving a nice bite without it becoming overwhelming, and there was a welcome hint of chilli heat to balance the cooling yogurt.

The bread was made with a mix of white and wholemeal flour, and had a good texture; soft but not insubstantial. The flavour was a little bland, but this makes sense in context as it had to work with eight very different soups.

Kake's verdict: I'd happily come here again if I was in the area and needed a quick takeaway lunch.

Accessibility: No steps to get in. All the seating is on high stools. No customer toilets.