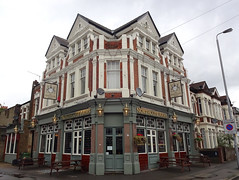 Pub on the Leyton/Leytonstone border, in the Good Beer Guide.

It's a reasonable size inside, with several distinct seating areas wrapped around the central bar; the remains of partitions make it clear that these were once all separate rooms. Windows along two walls of the pub have some rather nice stained glass. At one end there's a cosy corner with sofa and banquette seating photo, with a small stage in the corner for the pub's weekly drag cabaret session, and the seating space continues around from here past an ornately-tiled fireplace, a piano, and various paraphernalia including an original crest from Leyton Orient Football Club photo.

Out the back is a small yard with picnic benches photo which leads through to a separate building housing a wood-fired pizza oven.

Kake and friend visited on a Friday lunchtime in September 2017. Four of the five handpumps were on, offering Crate Session IPA, ELB Jamboree, Five Points XPA, and Signature Pale. A pint of lime and soda was £1.75.

According to the Northcote website as of September 2017, food is served 6pm-9:30pm Tue-Wed (a rotating street food residency), 6pm-10pm Thu, 1pm-10pm Fri-Sat, and 1pm-9pm Sun (wood-fired pizzas). On our visit, Kake tried the vegetarian pizza (£8.50) photo, which was very good. I usually find pizza a bit boring, but this had a well-flavoured base with occasional scorching to add interest, and the toppings were plentiful but also carefully judged; for example, the mushrooms were sliced to a precise thinness to let them cook through properly. I would happily eat this again, and I can't remember when I last thought that about a pizza.

According to a sign seen in September 2017, quiz night is Tuesday.

Child-friendliness: They have at least three highchairs (IKEA Antilop with trays). As of September 2017, their website advertises "toddler and tea Fridays" every Friday from 12:30pm to 3:30pm, but we saw no evidence of this on our visit.

Accessibility: A step to get in. One internal step between areas, and another to the building with the pizza oven (where food is ordered from).