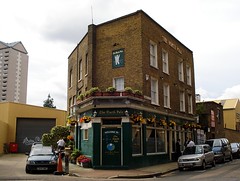 The North Pole was a traditional locals' pub on the Isle of Dogs. It closed in June 2014.

Traditional locals' pub on the Isle of Dogs.

Despite being geographically close to Canary Wharf, the North Pole is worlds away from the noisy, crowded, trendy identikit bars that infest the Wharf.

The interior is made up of a single room wrapped around the bar; although from the outside there seem to be two doors, possibly a remnant of division into lounge and public bars, only one of them actually opens. The windows are frosted partway up to provide some privacy from the street, the floor is carpeted, and there's a dartboard (which according to the 2009 Good Beer Guide is only used for team matches). There's a little bit of outside seating round the side, but it's not covered or anything.

There are five handpulls on the bar. Beers available on handpump in both September 2008 and June 2009 were London Pride and Timothy Taylor's Landlord, with Black Sheep Bitter as well in June 2009. They also have the standard range of draught lagers.

Kake visited on a Monday lunchtime in September 2008. Arriving just after noon, I wasn't too early for food. I had a pint of Pride and a ham, cheese, and onion omelette for a total of £6.45 (I think the omelette was £3.50). The omelette was fine, and a decent size, and came with fairly standard chips and a perfunctory but fresh salad garnish. Note that when you order food, they'll take your name, and when your food is ready they call your name out and you come to get it from the bar yourself.

I wasn't the first customer to arrive, and by the time I left a little before 1pm the place was quite full (though there was still at least one table free), with a scattering of locals as well as the inevitable suits. The radio was playing throughout, though not annoyingly loud, and the atmosphere was quite pleasant.

Accessibility: One step up to get in, but it's all level once you're in there.

If coming from Canary Wharf Tube Station, make sure you get the main (western) exit (follow signs for the DLR), not the one for Upper Bank Street. Bear left on leaving the station, cross Bank Street, and go into the building signed Jubilee Place; go right through the building, out the other side, and over the footbridge. Turn right at the end of the footbridge and go all the way along to the end of Admirals Way (don't turn left through the car park thingy as it's faff to get out again). When Admirals Way ends at Marsh Wall, cross over Marsh Wall then turn right and walk along until you see steps going down on your left. Go down these steps and you'll see the pub. (If you can't manage steps then turn left along Marsh Wall instead of right, take the first right onto Marshmaker Road, the first right again onto Byng Street, and then the first right again onto Manilla Street; the pub is just beyond the first bend of Manilla Street.) If coming on the DLR, then get off at South Quay Station and it's quite straightforward from there.
Last visited by Kake and Ewan, June 2009.
Last edited 2014-06-29 08:42:10 (version 12; diff). List all versions.