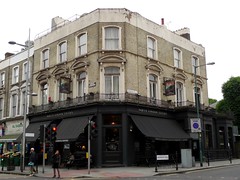 A spacious pub with period fittings, between Brondesbury and Kilburn stations.

Entering this pub, there's a large solid wooden bar area stretching across what might have once been two rooms back in its Victorian past, but have now been opened up, with seating and tables around the wall, a couch area in the front corner (under a large screen TV, muted on Ewan's visit) and another small area of couches towards the back. Photo of interior.

There's a separate dining area laid out with service in the rear of the pub. There's also a bookable function room upstairs, and several picnic-style tables outside on the street. On a Wednesday evening in summer, the place had a good number of people, but there were still tables available, and the dining room was empty early in the evening.

With its strong focus on food (menus can be found chalked up around the pub and there's the separate dining area), this is firmly in the gastropub genre, there's also plenty of space for drinking, and a good range of beers and wines. Four handpulls dispense Brains SA and Brakspear Bitter (£3.20/pint) on a June 2009 visit, and there are draught taps for Hoegaarden (£4.50/pint), Heineken, Amstel, and Addlestone's cider, amongst others. There's also a wine list, of course.

Food is served noon-3:30pm and 6:30pm-10:30pm Monday to Friday, noon-4:30pm and 6:30pm-10:30pm Saturday, and noon-9:30pm on Sunday. The menu covers bar snacks (which are available outside the times mentioned), starters, mains and desserts and there are plenty of options for vegetarians photo of menu in June 2009. Ewan tried the gnocchi with artichokes, roasted red pepper, cherry tomatoes, olives and parmesan (£10.50) photo. It came without undue wait and was flavoursome and tasty, with a reasonable amount of artichokes and olives for the price.