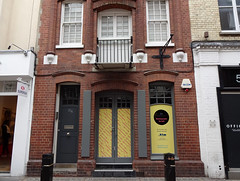 The Nordic Bakery was a Scandinavian cafe and bakery in Covent Garden, part of a small chain. It closed down in April 2018, though other branches remained open. As of October 2018 the premises are vacant (pictured).

Scandinavian cafe and bakery, part of a small chain with branches in Soho and in Marylebone. They serve salads, 'open sandwiches' on rye bread, plenty of cakes/pastries and extremely strong coffee.

The ground floor is relatively small and narrow, with dark furniture and dark grey walls giving a cosy but modern feel. There are a couple of large tables but most of the space is taken up with smaller 2-person tables. A sign indicates further seating downstairs. A jug of tap water (and glasses) is available by the counter.

Kat visited on a Monday lunchtime in March 2017 for takeaway. It was mostly empty, with only one or two tables occupied. I ordered a takeaway salmon salad (£5.90) and a cinnamon bun (£2.90). The salad was fine, containing a generous portion of steamed/baked salmon with not-quite-enough potato salad, chopped cucumber, mixed leaves and a separate pot of dressing. The cinnamon bun was large, warm, sticky, nicely chewy and smelled heavenly.

Accessibility: Two large steps to get in. No customer toilets on the ground floor, didn't check downstairs.