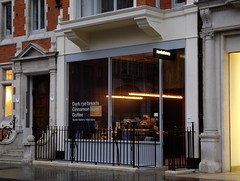 A very welcome addition to Soho's many coffee shops and cafes, the Nordic Bakery specialises in Finnish foods and strong coffee. The coffee is excellent, but moreso are the glorious (and enormous) cinnamon buns, baked regularly throughout the day and kept nicely warm.

As well as the pastries, there's a selection of traditional Finnish savoury foods, most of which involve fish, though the Karelian pies deserve special mention for their combination of rye bread, rice filling and egg butter topping (which is difficult to describe, but tastes divine).

There are a few tables for diners to sit at, including a couple of large ones in the centre of the room. It could probably seat about 20-ish people altogether. The design is, as one might expect for a Nordic country, functional yet stylish. The Bakery's look is heavy on the Helvetica (it could be confused for another media company, except for the welcoming smell of coffee and cinnamon), the walls are a muted colour, and the furniture has clean lines without being at all uncomfortable.

The Bakery is open late, which is a pleasant surprise, and is at all times highly recommended.