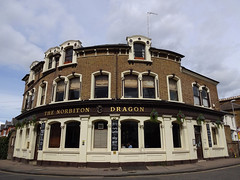 The Norbiton & Dragon was a pub in the Norbiton area of Kingston. It closed down in early 2017 and the premises were taken over by a different pub company which reopened it as the Norbiton.

The information below is retained for people who want to know what it was like as the Norbiton & Dragon.

Pub in the Norbiton area of Kingston.

The interior is dominated by the central bar photo, with seating and a narrow strip of standing space all around. Due to the size of the bar, it's not quite as spacious as one might expect from outside. Much of it is lit by the tall windows that wrap half the space, though there are a couple of darker, cosier areas around towards the back of the bar. Flatscreens are mounted at opposite ends of the room.

The floor is bare boards, and seating is a mix of low stools, high chairs, and padded benches. A separate dining area, ready laid with wine glasses and cutlery, looks out past several more tables on the exterior decking onto the beer garden at the back.

Kake and Shuri visited on a Wednesday late lunchtime in March 2016. There were half a dozen other people in when we arrived around 1:30pm, and music was playing quietly. Snooker was showing on one of the flatscreens and a news channel was on the other, both with the sound off.

The six handpumps on the bar were clipped for Sharp's Doom Bar, London Pride, Twickenham Naked Ladies, and Fuller's ESB. A pint and a half of lime and soda came to £2.40.

Accessibility: A large step at one entrance, and a smaller step at the other. Doorways are a bit narrow.