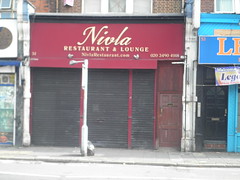 Nivla was a Sierra Leonean restaurant in Camberwell. It has now closed, and as of mid-2014 the premises are occupied by a solicitors.

Sierra Leonean restaurant in Camberwell, on Camberwell Road near where it becomes Walworth Road. They also do takeaway.

secretlondon visited for a takeaway in June 2010. I had the weekend special of bitter leaves, beef, and dried fish, with rice (£8). It was hotter than I expected, but I know nothing about Sierra Leonean food. I've been back a few times since and tried dishes including jerk chicken and jollof rice with chicken. The meat I've had from here wasn't offal, unlike the "mixed meat" I had at Moyo-Ma (another West African restaurant just down the road).

They have a number of daily specials and sell home made ginger beer (which I've not sampled). They are also licensed. I've had an akara bean doughnut starter (£2) photo which was fun. They had a cinnamon flavour which contrasted with a spicy tomato sauce.

A visitor called Camberwellian adds: An excellent restaurant with genuinely warm and friendly service. I've had: