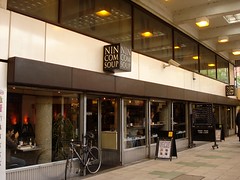 Independent fast-food-soup restaurant tucked away in the subways of Old Street Station.

It's quite dimly lit, with bare bulbs hanging on poles from the high concrete ceiling. Although it is essentially a concrete shell, the decor is quite decent. It seats around 40-50 people. There's a line of high backless stools along a counter at the window, but there's plenty of normal-height seating too including a couple of wooden pews along the back wall and even a sofa at the far end.

They seem to have the same six categories of soup available each day (poultry, meat, fish, cheese, pulse, and vegetable), with a rotating menu. Each day's menu is up on their website. According to an email Kake received from them in October 2011, almost all of their pulse and vegetable soups are vegan, and the ingredient list is available at the counter if you want to make sure.

It's good, thick/chunky soup, with even the small portions being solidly filling. On Kake's October 2011 visit, a small "cheese" soup (red pepper and goat cheese, £3.40 for a small portion) was fine, with thickness provided by puréed vegetables, balanced seasoning, and not overly goaty. I did wish they'd removed the pepper skins, but presumably this rather labour-intensive job wasn't possible at this price point.

They also do freshly-squeezed juices, and breakfast: porridge, pastries, cereal, etc. According to their website, the porridge is made with soya milk, and they also have soya milk available for all their hot drinks at no extra cost.

Accessibility: Step-free to get in, and it's all on one level once you're in, including an accessible toilet. The code for the toilets is printed on your receipt (non-customers wishing to use the loos are asked to pay 20p at the till, which goes to charity).