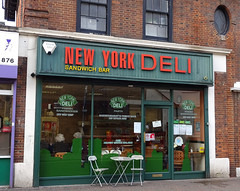 It's very small, seating only about 15 people on chairs crammed in around four small tables. Beyond the seating area, a glass counter displays sliced meats and other sandwich fillings, plus prepackaged slices of cake, eccles cakes, and so on. Boards on the wall list sandwiches and daily specials ("curry and rice" on our visit).

Kake visited on a Saturday lunchtime in December 2017. It was almost entirely full when I arrived around 12:15pm, and I ended up sharing my table with two other customers. Music was playing quietly. Most of the other people in seemed to be regulars, including a group of construction workers in hi-vis.

I went for a salt beef sandwich (£3.20) photo. The beef had a good balance between meat and fat, but was perhaps just a touch too salty. It was sliced then heated in the microwave before being put into the sandwich, and the moisture that came out afterwards made the bottom slice of bread a bit soggy. The bread itself was fine but nothing special.

Accessibility: No steps to get in. It's very cramped inside. No customer toilet.