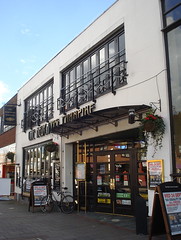 It's one of the less dimly lit Wetherspoonses, with a large skylight allowing light to penetrate most of the pub, though there's a small alcove opposite the bar for those who prefer a cosier atmosphere. A semicircular mosaic on the floor by the bar adds interest. Steps at the back (with stairlift) lead up to more seating including a couple of booths. Further back is a patio garden.

Kake visited on a Wednesday afternoon in September 2014. There were lots of people in at 4pm. No music was playing, but there was a good buzz of conversation.

There were several real ales on, including Climate Tornado, Terrapin Rye, Coach House Taverners, Roosters Yankee, Purity Mad Goose, and Deuchars IPA. A pint of lime and soda was 96p; they were doing a 7.5% off promotion so this likely equates to a regular price of £1.04.

Accessibility: No steps to get in, and there's a RADAR-locked accessible toilet on this level too. Some of the seating is on a dais or up steps at the back, but there are stair lifts to get up the steps at the back. (There may also be a ramp to the dais, but we didn't investigate that thoroughly on our visit). Other toilets are up three small flights of stairs.