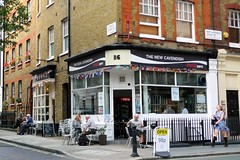 This small corner cafe closed in early-2012 and is now offices.

A small sandwich shop and greasy spoon on New Cavendish Street in Fitzrovia.

There's certainly no shortage of sandwich shops in this part of town, and this one isn't staking out markedly different territory from any of the others, but the owner (busily tending to the cooker as well as covering the counter) is very friendly and keeps the atmosphere jovial.

There's only one table in the middle, metal and seating four (or six at the absolute maximum), but on Ewan's visit he was sharing it with another solo diner. High stools can be found around two of the walls, which would take maybe another four to six people. There's a selection of newspapers and magazines, and a plasma screen TV sits above with the volume on (but not too loud).

The menu itself is fairly short, sticking largely to sandwiches (at around £2.50-£4), including a salt beef sandwich. There's no breakfast menu listed, but they offer full English cooked breakfasts (£4.50 including two pieces of buttered toast and a mug of either coffee or tea; not sure if there was a vegetarian option, but probably not) photo. Most of the takeaway customers were ordering bacon rolls and the like. The quality of the full English was good, with a perfectly-judged fried egg, baked beans that were not too messy, a sausage and some rashers of bacon, greasy but not overly so.

Accessibility: One set up to get in. No toilets.