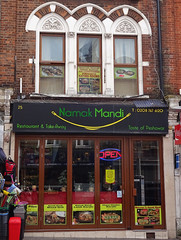 Pashtun/Peshwari/Afghan restaurant in Tooting. They also do takeaway, and they are halal.

It seats around 30 people on the ground floor, mainly at tables on upright padded chairs, but there's also a small area at the front where you can eat sitting on the carpet. Much of the decor is fairly basic, but squares of colourful fabric are pinned to the ceiling and walls, and the walls also have some nice tiling in places. An open grill kitchen runs along one side of the entrance space. Upstairs are bookable private rooms and booths for more carpet-sitting; these were in heavy use during our visit, judging by the many pairs of shoes sitting outside.

Kake and secretlondon visited on a Thursday evening in April 2016. It was fairly empty when we arrived a little before 6:30pm, but was filling up substantially by the time we left around 8pm. No music was playing, but a flatscreen was showing cricket with the sound on. A large jug of tap water was brought without us having to ask.

The menu photo is short and meat-focused, but does have a handful of vegetarian dishes. Sarsoon ka saag (£5) photo had been cooked long enough for the spinach to lose its green colour and break down completely into a rich, savoury sauce coating a tangle of well-browned onions.

Chapli kebab (£5) photo initially looked a little greasy, but didn't taste so at all. The meat had a good texture and flavour, studded with whole cumin and coriander seeds for extra bursts of flavour.

Lamb karahi (£8) photo featured some nicely tender lamb on the bone, with interesting connective tissue bits as well as muscle meat. The sauce was flavourful and plentiful.

Zeera rice (£3) was fine, with nicely-separated grains. Star of the carbohydrates, though, was the Afghan naan (£2) photo, freshly cooked and so large it came to the table on its own special stand.

A salad of tomato, cucumber, onion, lettuce, and spring onions photo came with our meal, and green tea was brought when we'd finished eating; neither of these appeared on the bill.

Kake's verdict: There's a lot of good food in Tooting, but this is one I'd happily come back to.

Accessibility: A large step to get in (though a sign in the window says they can put a ramp down), and toilets are up a flight of stairs.