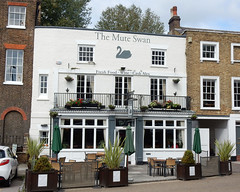 Pub in East Molesey, just across the road from Hampton Court Palace.

It's a large, open space inside photo. Leather armchairs, padded banquettes, and upright chairs and tables are complemented by a couple of tall round tables with high stools. Richly-coloured patterned rugs are placed here and there over lightly varnished floorboards.

Wood panelling reaches halfway up the walls, with framed vintage photos and art prints above. A wrought-iron staircase winds up through a square void in the ceiling to more seating on the first floor, and there are some tables outside out the front too.

When Kake visited on a Tuesday lunchtime in September 2015, there were only four other customers shortly before 12:30pm, but by 1pm there were a dozen people in and a good buzz of conversation. Music was playing, not too loud. When Northern Steve visited on a Saturday afternoon in October 2016, the place was fairly full at 3:30pm with about three tables free.

In September 2015 there were six real ales on: Truman's Somersault, Twickenham Naked Ladies, Hop Art Hoppy Blonde, Andwell King John, Tillingbourne AONB, and Brunning & Price Original Bitter (the latter brewed by their parent company). They also had Westons Twist real cider on a seventh handpump. A pint of lime and soda was £1.95. In October 2016 they again had six real ales on: Hogs Back TEA, Tillingbourne The Source, Andwell Gold Muddler, Windsor & Eton Eton Boatman, Trumans Zephyr, and their own bitter. The three we tasted were all kept well.

According to their website as of October 2016, food is served noon-10pm Mon-Sat and noon-9:30pm Sun.

In September 2015, Kake first tried to order the pan-fried mackerel with hassle [sic] potato, but they'd sold out, which seemed a little odd less than an hour into lunch service in a fairly empty pub. My second choice was available, though: roast tomato and spinach quiche with artichoke and potato salad with pesto dressing (£9.45) photo. The pastry on this was very rich and crumbly. The filling wasn't very quiche-like, consisting mainly of spinach and (unadvertised) cheese, with no perceptible egg and very little tomato. Pine nuts were also prominent. The potatoes in the potato salad were nice and firm without being undercooked, and the pesto wasn't overwhelming. Overall, though, the quiche was rather too rich for something described on the menu as a "light bite", and it wasn't really a quiche.

In October 2016, Northern Steve et al. ordered the bar snack board of four (of five) options for £12.25 between three of us, which was good for a lunchtime snack.

Service in September 2015 was helpful and welcoming, with the staff member behind the bar taking care to greet everyone who came in even when she was busy serving other customers. Table service is available for food and possibly also drinks.

There's free WiFi, but my phone automatically signed me into it via saved credentials, so I'm not sure if there are any conditions on it.

Child-friendliness: According to their website as of August 2015, "well behaved" children are welcome in the first-floor restaurant, and a few highchairs are available, but the pub is "not particularly suitable for babies and toddlers in the evenings"; also, prams are not permitted inside but there's a covered area to park them outside. There's a pull-down nappy change table in the ladies' (gents' not checked). They have a small children's menu (four items as of September 2015, none vegetarian).

Dog-friendliness: According to their website as of August 2015, "well behaved" dogs are welcome in the bar and outside as long as they're kept on a leash. On our October 2016 visit there were about half a dozen dogs present inside.

Accessibility: No steps to get in. Toilets are up a flight of stairs with a sturdy handrail most but not all of the way up on one side.