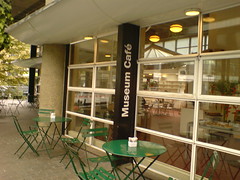 The cafe adjacent to the [Museum Of London]? on London Wall, near the Barbican.

secretlondon went there at 1:45pm on a weekday in September. Initially there were no staff but someone shortly arrived. There were no other customers.

The feel of the cafe is like a conservatory. The chairs are metal and the table tops are fake marble plastic. Some tables are also outside. I didn't check to see if you could smoke there. There was muzak in the background which was quiet but still muzak. The reciept had "Digby Trout rest" on the top so it may be run by an outside organisation.

It sells hot soup and rolls (two choices, £3.75), as well as sandwiches, cakes and hot and cold drinks.

I bought a pre-packaged smoked ham and edam sandwich (by Daily Bread) for £3.70 and a can of Ubuntu Fairtrade cola for £1.70 photo front and rear. The staff member entered £2.20 on the till for the can of drink and I commented. He denied it, smiled at me and said he had put it through for £1.50. I backed down as he wasn't prepared to move. After I had paid he looked at the receipt and gave me 50p back. He didn't apologise.

Accessibility: There is a lift to the podium level and no stairs so there is certainly step free access inside. There are toilets inside the cafe and in the museum on the same level.