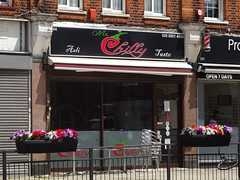 It's quite small, seating only around 40 people at small varnished-wood tables flanked by black pleather banquettes and upright chairs. The floor is more varnished wood, and colourful murals are painted on walls and ceiling photo. A semi-open kitchen is at the back.

Kake visited on a Wednesday (Eid) lunchtime in July 2016. There were no other customers when I arrived around 1:30pm, but a party of eight turned up half an hour later. No music was playing. A plate of sliced cucumber and onion was placed on the table as I sat down, along with squeeze-bottles of minted yogurt and chilli sauce.

Vegetable biryani (£5) photo was pretty good, with plenty of flavour from both whole spices and spice paste. The vegetables were varied in texture and flavour, and all cooked just right, from soft potato to crisp baby sweetcorn. Little pockets of smoky flavour made it clear that this had been cooked properly in an oven; I only wished there had been more of them. A decent enough raita was brought along with it. The portion was generous, and I ended up taking about a third of it home as takeaway.

Service was friendly and helpful. I paid at the till, so didn't see a bill, but no service charge was added. There was a tip jar next to the till.

Accessibility: No steps to get in, and step-free to the toilets. The ladies' doubles as an accessible toilet, with a large cubicle, grab bars, and a low sink (but a high-up soap dispenser and hand drier).