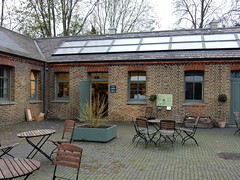 It's located in the former stable block of the park, and owned by the National Trust. It's an old building, with an uneven floor. There's also a garden centre in the grounds somewhere.

secretlondon visited in September 2016. Hardback books were £2 and paperbacks £1. I doubt they take cards.

Accessibility: There were no toilets there but there are accessible toilets in the grounds in the cafe and former snuff mill, according to their website. The floor is uneven and it's quite tight.