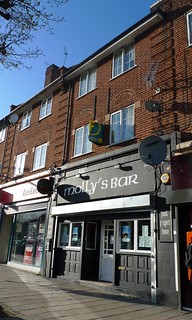 An Irish shop conversion pub on Bowes Road near Arnos Grove Station in New Southgate. The Beer In The Evening comments (see link below) indicate it was refurbished in 2010.

This is a real Irish pub rather than a fake one - it has a lot of Irish music on the jukebox and the walls are covered with photographs of the community. It's fairly small, with a long narrow space lined by tables on either side. Smokers stand outside on the street. On our April 2012 visit at 6pm, it was already well-attended and most tables were taken.

On the bar, they offer John Smith's and draught Guinness (£3.10/pint), as well as other standard cooking lagers. secretlondon had a pint of lime and soda (80p).

Posters advertise live Irish music every weekend. There is also a cash point next door which is part of the local Sainsbury's supermarket.

Accessibility: One step to get in, but toilets are on the same level (down the back of the pub through an unmarked set of white swing doors).