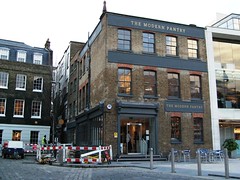 An excellent cafe, restaurant, and delicatessen in Clerkenwell, opened in late 2008.

This venture, which was started by one of the partners at the Providores & Tapa Room in Marylebone, overlooks the historic St John's Gate near Clerkenwell Green. Inside, the decor is sophisticated, modern, light, airy and attractive. The cafe downstairs seats 40 and is open every day. A delicatessen sells produce and dry goods in a back room. Upstairs is a larger dining area (60 covers), in two large rooms photo of the upper front dining room.