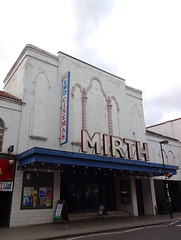 Mirth, Marvel And Maud was an Antic pub in Walthamstow. It has now closed for redevelopment; according to its website, 4 January 2020 was the last day of trading.

Antic pub in Walthamstow, in the Good Beer Guide.

It's situated in a converted cinema, and pretty big inside. Entry is into a large space with widely-scattered seating, a table-football table, a Star Wars pinball machine, and a kiosk in the centre acting as a cocktail and champagne bar. Pillars — real and faux — add interest, along with an ornately-moulded ceiling, painted in blues and golds to bring out the details.

The bar itself is down some steps from here, along with a corridor leading to a performance space ("Maud") which hosts comedy, cinema screenings, play readings, and so on. Finally, up a pair of staircases from the foyer, past two huge arched mirrors, is a restaurant area.

Kake visited on a Thursday afternoon in September 2017. I was the only customer when I arrived around 4:30pm. Music was playing, not too loud. The handpumps were clipped for ELB Dandy (£1.85/half), Dark Star Revelation, Volden Session, and 360° APA.

I'd intended to eat there too, but when I went to the bar at 5pm they told me the chef was running late and food might not start for around half an hour, so I went elsewhere.

According to a sign seen in September 2017, quiz night is Monday from 8pm.

Accessibility: Three steps in with no handrail. More steps to the bar, toilets, and restaurant area. Access to the ladies' toilets is quite narrow.