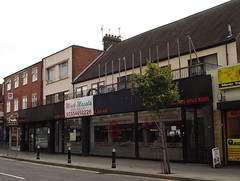 This was an Indian restaurant in Goodmayes, part of a small chain. It has now closed. As of mid-2016 the premises are occupied by a Turkish restaurant.

Indian restaurant in Goodmayes, part of a small chain. According to a sign seen in August 2013, they are cash-only.

It's a large space, canteen-like and a bit scruffy. The ground floor has around 25 melamine-topped tables, most of them seating 6 people. There are floor-to-ceiling windows at the front of the room and more windows at the back, but the ceiling is fairly low so light doesn't really penetrate too far. A semi-open kitchen sits to one side. Downstairs in the basement, there's some surprisingly nice tiling in the ladies' toilets, quite a contrast to the unloved decor elsewhere in the place.

Kake and Sarah visited on a Thursday lunchtime in August 2013. There were only two other customers during our visit, leaving the majority of the space very empty. No music was playing.

Poppadoms and salad arrived on our table shortly after we sat down; we didn't ask for these and aren't sure whether we were charged for them, as the bill wasn't itemised. The poppadoms were very stale. We asked for tap water, but it didn't arrive until we reminded them several minutes later; when it did come, it came in a large jug.

Saag paneer photo and karahi mushrooms photo were OK, though nothing special. Our favourite dish was the chana dal photo; the split chickpeas were cooked to a nice softness which still retained a bit of bite.

Garlic naan photo wasn't bad, though clearly not freshly made. Plain rice was a generous portion, but rather too salty.

Our final bill was £8/head.

Kake's verdict: I'm a bit unsure what I think of this chain in general; but in the specific, I probably wouldn't bother coming back to this branch. The space is unlovely, the service was indifferent, and the food was just average.

Accessibility: No steps to get in. Toilets are in the basement, down a wide flight of stairs with a bend in the middle and sturdy handrails on both sides. One of the cubicles in the ladies' is extra-large (don't know about the gents').