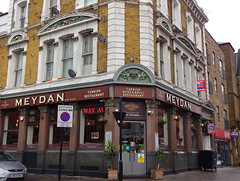 It's a relatively small space seating around 50 people, made to feel smaller by the large square pillars that stand here and there. Decor is primarily wood effect and black pleather, but a dark orange feature wall at the back adds interest, enhanced by a huge print of a city night scene. Large windows on two sides let in plenty of natural light. An open kitchen and grill station are to one side, and there's another similarly-sized dining space in the basement.

Kake visited on a Tuesday lunchtime in November 2019. Arriving around 12:15pm, I was the only customer, though one other did pop in for a takeaway while I was there. Culturally-varied pop music was playing, initially a little louder than ideal for conversation, but turned down later to a barely-audible level.

Small portions of decent hummus and cacik were provided almost immediately after I sat down, along with a small, fresh, hot ciabatta-style loaf photo. No charge for any of this appeared on the bill, and the glass of Turkish tea I had after my meal was also complimentary.

I went for the imam bayeldi (£11) photo — a halved aubergine stewed in oil and topped with tomato sauce. The aubergine was well handled; soft but not disintegrating. It was quite oily, but in a good way. Textural contrast came from the lightly-cooked vegetables in the tomato sauce: celery, onion, and red and green peppers.

Salad on the side was very good: fresh, crisp, varied, and seasoned with a well balanced mixture of salt, lemon, and oil. The only disappointing note on the plate was the rice, which was easy-cook and really not great.

Accessibility: A large step with no handrail followed by a few more steps with handrail to get in. Toilets are in the basement, down a flight of stairs with two bends and a handrail on one side.