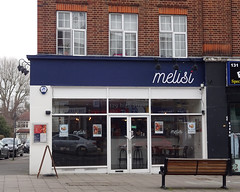 Italian restaurant, bar, and cafe in Ruislip, just around the corner from Ruislip Station. They also do takeaway and delivery, with online ordering via Just Eat.

It's quite small, but its situation on a corner means plenty of sunlight is able to enter through the floor-to-ceiling windows on two sides. Sturdy square tables are topped with attractive moulded tiles in various black-and-white designs, and stylised "bare bulb" lighting hangs from the ceiling. A wood-fired Valoriani pizza oven can be seen behind the large service counter.

Kake visited on a Thursday lunchtime in February 2018. There was just one other customer when I arrived a little before 12:30pm, but two more turned up while I was there. '80s soft rock was playing, not too loud.

From their lunch menu I chose the prosciutto crudo, brie, and rocket toasted sandwich (£5) photo. There was a good balance of ingredients, and the brie was properly melted. The prosciutto was perhaps a little tough, but had a good flavour and wasn't too salty. The bread, made on the premises in their wood-burning oven, had a good chew and some nicely blistered areas on the crust.

Earl Grey tea (£1.50) arrived as a cup of hot water with the teabag on the side, even though I hadn't asked for it to be served weak. The teabag was good quality (Dammann premium brand), heavily scented with bergamot, but would have been better brewed properly with boiling water. The cup was attractive but impractical; quite heavy, but with a tiny-holed handle that made it impossible to lift with one hand.

Service was a little confused, possibly due to language issues, but overall friendly and welcoming. No service charge was added to the bill photo.

Kake's verdict: I'm not a huge fan of Italian food in general, but I'd not say no to coming back if I was in the area.

Child-friendliness: They have at least two highchairs. There's a pull-down baby change in the (unisex) toilet.

Accessibility: No steps to get in, and it's step-free through to the toilet (a single accessible cubicle).