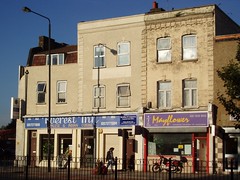 Not-bad, not-great Chinese takeaway on the Old Kent Road. Delivery is free for orders over £8.

Kake and bob tried the delivery option in May 2007. Mixed starters for two (£5) were competent apart from the crispy seaweed, which was far from crispy, and the BBQ spare ribs, which were about two-thirds fat with very little meat. Aubergine in sea spice sauce (£2.90) wasn't bad; certainly better than the version we had recently from Sanh Hing. Stir-fried broccoli Szechuan style (£2.80) was very good, with a decent amount of heat coming from the fresh red chillies included in the dish. We also tried one of the chef's specials, "Amazing Potatoes" (£3.50), which seem to be potato slices stuffed with some kind of meat, then battered and deep-fried; actually quite nice.

It's worth noting that their "Thai" food is almost entirely unlike Thai food. Pad Thai, for example, was unrecognisable. Stick to the Chinese dishes.

Kake's verdict: Probably won't bother ordering from here again as they don't offer online ordering and in any case there are better choices in the area (e.g. Dream Taste).