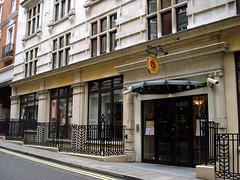 Matsuri was a Japanese teppanyaki restaurant just off Piccadilly. It has now closed. As of early 2017 the premises are occupied by a different Japanese restaurant called Ginza Onodera.

On a February 2011 visit, itsbruce and Jen began with three small dishes. The batter and sauce of the karamari (calamari, £6) were very good but the squid could have been a little more lightly cooked. Vegetable tempura (£9) was pleasant but unexceptional. Seared salmon with wasabi yuzu sauce (£6), on the other hand, was excellent; even the salad garnish was good, with a little extra kick provided by mustard cress.

The two main courses were of a more consistently high quality. Jen's organic salmon teryaki (£25) was firm, succulent and she was very happy with it. itsbruce's Scottish sirloin steak (£28 for a 200g cut) was exquisitely cooked (for once, medium rare actually meant that the centre of the meat was still rare) and served with a wasabi and mustard dipping sauce which complemented it wonderfully. Both teppanyaki came with slices of lotus root, squash and asparagus. We added genmai brown rice and Japanese pickled vegetables (both £3.50) as side dishes; the rice was slightly sticky without being too glutinous and had a pleasantly nutty flavour. The pickled vegetables included a deliciously sharp pickled plum.

This was accompanied by a bottle of smooth, cold saké (have temporarily lost my note of the name) which was a little reminiscent of a dry martini.

For desert, we chose Tokyo cheesecake, a lighter variant of New York cheesecake without the cracker base, and fireball mango and ice cream. The latter dish consisted of half a mango and a large square of vanilla ice cream, was served by a Teppanyaki chef and provided the most drama of the evening, since the lights above the table were dimmed and flaming sake sloshed across the griddle. After all that, the dish was a bit of a disappointment; while the mango was good, the ice cream seemed not to have benefited at all from the process. We accompanied the deserts with Tokaji Yuzu desert wine (£4.50 per glass), which was sweet but with a complex spiced/scented bouquet and more than made up for the let down of the ice cream.

Matsuri do offer fixed menus which start at £48 per person; the most expensive, centred around Wagyu beef teppanyaki, is £165 per person. There is also a special five course pre-theatre menu for £25 per person, available between 6pm and 7pm. Vegetarians should go for the special vegetarian fixed menu; vegetarian options only form a very small portion of the main menu.

itsbruce's verdict: This restaurant offers some truly excellent food but the quality seems a little inconsistent, given the price. That said, Jen and I would happily return; we would just be more careful in our selection of dishes.

There was another branch in Holborn but it closed after a fire in 2009, and as of April 2011 that site is occupied by a Korean restaurant called Kimchee.