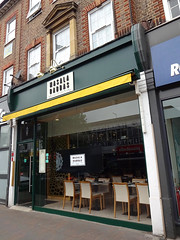 Indian restaurant in Orpington. It opened in September 2017.

They're aiming for an upmarket feel, with pale wood floor and chairs, marble-style tabletops, glossy black plates, dark green walls, and geometric-patterned room dividers. An open kitchen is visible behind the bar in one corner.

According to their website, they aim to produce Indian food "as Indians know it", though the menu does have a small selection of kormas, jalfrezis, and dhansaks "for the diehard British curry fans". Vegetarians and vegans are well catered for, with an entire separate vegan menu.

Kake visited on a Thursday lunchtime in May 2019. Arriving at their opening time of noon, I was the first customer of the day, though three more turned up while I was there. Relaxing music was playing, not too loud.

I went for the vegetarian thali (£14.45) photo, which is only available at lunchtimes. This included four dishes (vegetable manchurian, panchmirch paneer, makai palak, and tadka dal) as well as rice and naan. There's also normally a dessert, gulab jamun, but I knew I wouldn't eat this so asked for it to be left off to avoid waste; they were perfectly happy to do this, and even offered me mango sorbet as an alternative.

The dishes were all pretty good, with perhaps just a slight tendency to more sweetness than I prefer. The paneer was a little oily, but in a way that complemented the dish. All the flavours were nicely distinct. The rice was fine, with nicely separated grains and not at all watery. The naan was fine too, though nothing particularly special.

A 10% service charge was auto-added to the bill.

Accessibility: A steep, short ramp in (essentially a smoothed-over step) and then a 90-degree turn. It's all level once you're in, and the toilet is an accessible one with a high toilet, low sink, grab bars, and alarm cord.