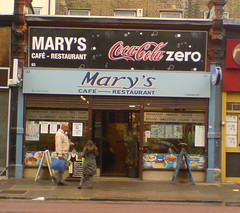 secretlondon visited in September 2008 and had one of the set breakfasts for £5. She got bacon, sausage, chips, egg, mushrooms, baked beans and two slices of toast photo with a cup of coffee photo. She also had a large latte for £1.50 afterwards photo. The food was fine but the toast came after the breakfast had arrived.