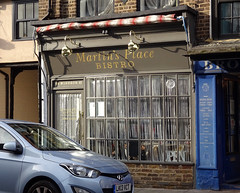 It's very small, seating only 18 people. Decor is traditional, with a black-and-white tiled floor and white-painted walls with pictures of the restaurant on one side and French scenes on the other. Laminated tablemats provide yet another view of the restaurant, in a colourful mosaic style.

The food is what one might describe as "old school" — prawn cocktail, deep-fried camembert, chicken cordon bleu, and steak au poivre. As of December 2014, a minimum charge of £14.50 per person is applied in the evenings, but there are no such restrictions at lunchtime. There's a good-value lunch menu available, with everything under £5 photo.

Kake visited on a Thursday lunchtime in December 2014. I hadn't booked, but knowing how small the place is I did phone ahead to check there wasn't a party booked in. There were two other customers during my visit, apparently regulars. The radio was on (BBC Radio 2), not too loud.

A starter of prawn cocktail (£3.85) photo was pretty much exactly as one might expect, and the prawns and lettuce were fresh and nicely chilled. Unfortunately there was a small piece of prawn shell included, but only a very small one. Complimentary bread and butter arrived with this; the bread had a lovely crunchy crust, and the butter was fresh.

Ham and mushroom omelette (£4.25 from the lunch menu, including salad or chips) photo was a little disappointing. The omelette was drier and more rubbery than I'd hoped, and perhaps a little underseasoned. The chips were good, though — proper chips, cooked properly, and perhaps my favourite part of the meal.

Service was a little standoffish with me, and much more relaxed with the other two customers. The giant peppermill brought out at the start of each course was amusing though. My final bill was £8, with no charges added for either service or the bread and butter, and was actually rounded down by 10p to give a nice round number.

Accessibility: A small step to get in. Toilets not checked, but if they exist they're accessed through the kitchen.