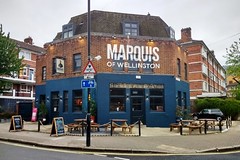 Pub on Druid Street in Bermondsey. It was previously a sports pub (see older version of this page), but was refurbished and changed hands in 2016, reopening in November of that year under the "Bermondsey Pub Co" brand of Enterprise Inns.

The interior has that "deliberately unfinished" look made popular by Antic, with worn boards on the floor, scuffed paintwork, peeling wallpaper, and exposed brickwork and plastering. Seating is an eclectic mix of armchairs, sofas, padded banquettes, school-style chairs, and long backless benches. There are several small separate areas running around the central bar, with free passage between.

Kake visited on a Thursday afternoon in June 2019. There were a couple of other customers in when I arrived around 1:45pm, and a few more arrived while I was there. Music was playing, not too loud.

The handpumps were clipped for Reunion Gin Palace and Exmoor Exile Apollo. They also had keg taps for craft beer, including a couple from Anspach & Hobday which is just across the road. A pint of lime and soda was 70p.

Food is limited to pizzas, salads, and desserts.

According to a sign seen in June 2019, there's a quiz every Wednesday from 8pm. Also, they still show sport — on our visit there were posters advertising every match of the women's football world cup shown live.

Accessibility: A small step at the side entrance, less than an inch. No steps to the ladies' toilet, but there are two heavy doors along the way.