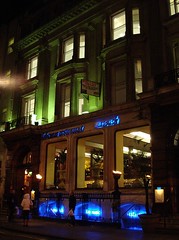 Lebanese restaurant in Marylebone, just north of Oxford Street. It has three seating areas; the basement features live music and bellydancing every evening, the ground floor is a fairly normal restaurant style which also has some seats at the bar, and the mezzanine overlooks the ground floor area.

Kake, Bob, doop, Juliet, Firedrake, and Dave visited on a Sunday evening in March 2008. We'd booked a table but probably didn't need to. We were seated on the ground floor.

We ordered a selection of mezze to share; two dishes each plus bread was sufficient for most of us, though Bob ordered a main course as well. There were plenty of vegan choices. Although the individual mezze prices may seem a little high, they do come with bread, and despite asking for a couple of refills of bread, we don't seem to have been charged extra. We ended up paying £200 between six of us (i.e. £33 each), including service, four bottles of wine (£18 apiece), a few coffees and things, and a (free of charge) fruit platter to finish, including bananas, pineapple pieces, apple, orange, and blood orange pieces. This is actually pretty good value, especially for the area.

Particular favourites among the mezze were the Hommos Beiruity (spicy hummous, £5.25), the Bazenjan Al-Rahib (chopped grilled aubergine mixed with tomato, onion, parsley, and mint; £5), and the Hommos Shawarma (more hummous, this time topped with sliced lamb; £6.50). The Bastorma (spiced sliced smoked beef fillet; £5.50) was good but rather salty. Falafel (£4.50) were fine. Photo of the spicy hummous and the aubergine salad

Bob also asked for chilli sauce to go with his lamb shawarma main course, and when it came it was very very good; a slightly creamy home-made sauce with just the right amount of burn. (This didn't appear on the bill.)

Service was a bit confused; although they seem to be going for a slightly upscale feel, the service was quite unpolished, with wine glasses being topped up unnecessarily (i.e. fuller than is really optimal) and several failures to find the correct balance between being available when needed and avoiding interrupting conversations. They also brought fresh orange juice instead of the fresh lemon juice that Kake requested, but it was damn good orange juice, and refreshingly sharp, so I drank it anyway.

They do a few cocktails, all at £7. It's worth noting that one of these is an Amaretto Sour, which is often hard to find. It was a decent enough rendition, though its size (almost half a pint) and the presence of sugar in the ingredients list suggests that the proportion of Amaretto was not very high. Still nice though.