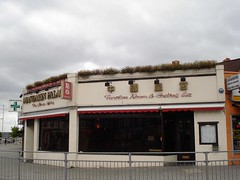 It's fairly large, stretching back from the frontage on Gants Hill roundabout. The main dining room seats at least 60, mostly at four-tops, though there are a couple of larger tables too. The space is broken up with dark wood and ceramic privacy screens. Although there's very little natural light except at the front, the artificial lighting further back is softened by clever use of false ceilings. Tables are laid with white linen. A smaller room at the back has a couple of large round tables for bigger groups.

Kake visited for a dim sum lunch on a Thursday in March 2010. Bland pop music was playing quietly, mostly drowned out by conversation from the four or five groups of other customers. Small dishes of salted peanuts and a crunchy, tangy, slightly hot cabbage pickle were already on the table when I sat down, a nice change from the all-too-common situation where Chinese groups of diners are given the interesting nibbles and everyone else gets a basket of prawn crackers.

Overall, the dim sum was competent though not outstanding. Shanghai dumplings (aka soup dumplings/xiao long bao, £2.30) were sadly lacking in soup, though the meat filling was flavourful and juicy. Grilled turnip paste (£2.30) had some nice browning on the outside, but the flavour was inconsistent, with only some of the pieces having a good turnippy bite; a more generous inclusion of meat pieces would have been nice too. The prawns in the king prawn cheung fun (£3.80) were somewhat flavourless and surprisingly small. Jasmine tea was £1, and was fine.

Service was friendly and efficient. A 10% service charge was added to the bill.

Kake's verdict: Although I've had better dim sum elsewhere, I've also had worse, and the overall experience was pleasant enough that I wouldn't say no to coming back if I was in the area.

Accessibility: One step up to get in, and two more to get to the toilets.