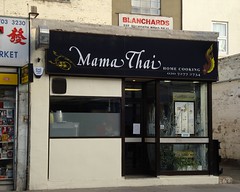 Thai restaurant and takeaway on Walworth Road in Walworth. It opened in late 2008 on the site of the former Wimpy.

They're not licensed, but you can BYOB (they do charge corkage). According to Boak And Bailey, the off licence next door has a good selection of bottled beers.

Although they advertise takeaway and delivery, when secretlondon asked about delivery areas it turned out that they will only deliver to addresses they can walk to.