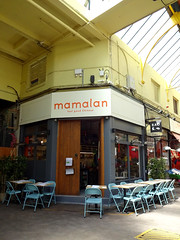 Beijing street food cafe in Brixton Village Market. It opened in 2011, having originated as a supper club, and in late 2013 it opened a second branch in Clapham.

It's a small unit, with only a few seats inside and a dozen more outside (in the covered market space). Fresh flowers sit in glasses of water on the sturdy wooden tables, along with bottles of soy sauce and black vinegar photo.

The menu is short and focused, featuring noodle soups, dumplings, fried snacks, and salads photo. As of early 2014, it's all available for takeaway. Drinks include several types of tea, plus cocktails and mocktails, Tsing Tao beer, and wine photo of drinks menu.

bob visited on a Sunday afternoon in March 2014. When I arrived around 3pm there were plenty of free seats outside.

Spicy chicken wings (£5) photo were nicely crispy, not at all greasy, and had a decent chilli kick to them. Pork and Chinese leaf potstickers (£4.50) photo were also very good, with nice chewy wrappers suitably browned on the bottoms; the filling was juicy and not at all dry. Seaweed salad (£3.50) photo came dressed with chilli oil and sprinkled with sesame seeds.

Peppermint and ginger tea (£2.50) photo was made with a peppermint teabag and chunks of fresh ginger, with rock sugar provided to sweeten it.

bob's verdict: The chicken wings were possibly the best I've had for some time. I'd go back just for those alone.