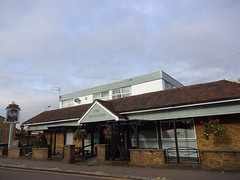 McMullens pub in Cheshunt, quite close to the station.

It has two rooms inside, one at the front and one at the back, with bar service in each. There's also some outdoor seating at picnic benches at the front and side. The back bar is relatively casual, with a pool table, a reasonable amount of standing room, and a mix of high and low seating.

The ceiling in the front bar is low, with exposed beams, but painted a light cream to stop it seeming too gloomy. Walls are also light cream, aside from a single William-Morris-style feature wall. A flatscreen sits at either end, though the space is broken up with privacy screens so it's possible to find a seat with no view of either. Seating is provided for around 30-35 people, with standing room for a few more.

A shelf of books runs around the walls up near the ceiling, botanical and zoological prints hang on the walls, and a pigeonhole-style display unit holds a collection of vintage bottles. The overall feel is well-kept traditional, with lots of dark varnished wood, a patterned carpet on the floor, and a dado rail; and everything looking very clean.

Kake first visited on a Monday lunchtime in October 2013. There were no other customers during my visit. One of the flatscreens was on, showing the Jeremy Kyle show with the sound on. The handpumps were clipped for three McMullens ales: Country Bitter, AK, and IPA. A pint of lime and soda was £1.40.

On another visit on a Thursday lunchtime in November 2017, there were three other customers at 1:30pm, two of them having lunch (which accounted for the smell of somewhat older-than-ideal oil coming from the kitchen). One of the flatscreens was showing '90s music videos with the sound on. The handpumps were clipped for Rivertown Proper Porter, McMullens Country Bitter, and McMullens AK. A pint of lime and soda was £1.50.

Accessibility: A somewhat narrow ramp to get in, with handrails on both sides photo. No steps to the toilets, and there's a RADAR-locked accessible one. The pub has its own car park.