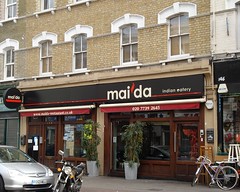 Maida was an Indian/Pakistani restaurant at the north end of Brick Lane. It has now closed. As of August 2019 the premises seem to be occupied by something called Proceed Clockwise.

Indian/Pakistani restaurant at the north end of Brick Lane (the Maida website describes it as Indian, while Jay Rayner's review linked below describes it as Muslim Pakistani; a Chowhound comment also suggests that some may consider it to be Bengali).

The restaurant is entirely alcohol-free - they don't serve it, nor do they allow you to bring it in. They also do takeaway and delivery, and you can order online from Hungry House.

Interestingly, their menu also includes a range of Indo-Chinese items; that is, an Indian take on Chinese food. And amusingly, this range even includes a dish described as "American Chop Suey" - meat, veg, pineapple, cucumber, and noodles (£7).

Kake tried the delivery option in July 2008. Thread chicken to start (£4, from the Indo-Chinese menu) had clearly suffered from the takeaway process - I really really want to try this in the restaurant context, as I suspect it works very well served fresh. Daal tomato parfu (£4.50) was advertised as "a tangy lentil preparation with tamarind and tomato"; it wasn't particularly tangy, nor particularly exciting, though there was nothing obviously wrong with it. Cumin and mustard seeds were apparent, but I'm fairly sure they used dried curry leaves rather than fresh, and I think fresh would have worked better. Bhindi dahiwala (okra in yoghurt; £6), on the other hand, had a good tang to it, and a little bit of heat, though there was far more sauce than okra. Pilau rice (£4) was fine - it comes with a choice of toppings, but I just had plain. My delivery also included a small portion of a salty, spicy-hot, tomatoey thick sauce type thing. I have no idea what this was, but it was quite tasty. It might have been the dipping sauce for the thread chicken.

Kake and Bob had another delivery a couple of weeks later. Hot and sour soup (£3) was OK; the hotness and sourness both came through clearly, but it was perhaps a bit on the gloopy side. Mixed grill (£9) was fine, with well-marinaded meat which was moist without being mushy (the lamb chops were particularly good), and plenty as a starter for two. Lamb rogan josh (£7.50) was terribly oily; but in its defence, the meat was nicely tender. Szechuan-style vegetable kofte (£7.25 - "Szechuan Veg" on the Indo-Chinese menu) were again far too oily, though the kofte themselves were pretty good, and the sauce had a decent amount of heat.

Kake's verdict so far: Reserved. I've seen both good and bad reviews of this place, and I don't really want to judge it solely on the basis of takeaways. I'd definitely give eat-in a go if I happened to be in the area, but I'm not sure I'd get takeaway again (though this is partly because I really like vegetables, and they don't seem too strong in that area - it seems like a good place to go if your plan is to eat lots of grilled meat).