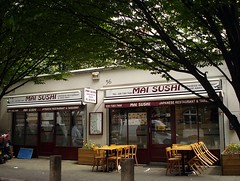 They also do takeaway and delivery (free for orders over £12 within a 1-mile radius, as of June 2010). There's some outside seating on the pavement (the road is a fairly quiet one).

Kake and Sarah first visited on a Wednesday evening in June 2010. Edamame (£3) were well-judged, and snow crab shumai (£5.50) were fine. Mixed sashimi salad (£8.50) had a generous quantity of fish and a pleasingly well-balanced dressing. Nigiri were very well-priced (e.g. yellowtail nigiri was £2.80 for two pieces) but still decent quality.

Service was very friendly, and they were very patient with us considering it was an hour past their closing time when we eventually left (we didn't realise this at the time). A 10% service charge was added to the bill.

We visited again on a Friday lunchtime in July 2011; it was fairly full when we arrived a little before 1pm, but there were a couple of free tables. We each had the sushi bento box (£13) this time, which included four pieces of maki, four nigiri, seven pieces of sashimi, rice, miso soup, salad, and pickles. It was plenty of food, and all of decent quality. The sashimi was varied, too; it wasn't all tuna and salmon.

Kake's verdict: I'd happily come back if I was in the area.