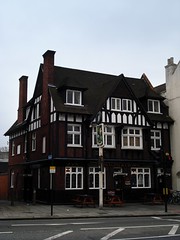 They serve interesting real ales, and usually real cider too. An anonymous commenter tells us that despite the early-2010 change of landlord, as of December 2011 they still have two guest ciders available, and the house ale is from the local Twickenham brewery. The handpull selection changes often, and a chalkboard above the door is kept up to date with details and prices of what's available. According to an advert in the Dec 2011/Jan 2012 issue of London Drinker, they stock bottled Belgian ales and German wheatbeers, and also have some of these on draught.

The interior is quite traditional. There's a beer garden out the back (with a cycle rack) and a few benches out the front. Prior to the change of management there was a bar billiards table, and this page suggests the presence of other games like shove ha'penny — but an anonymous visitor (August 2010) tells us that they now have a pool table instead of the bar billiards (we haven't checked this out yet).

Kake first visited on a Friday afternoon in October 2007. There were a few other customers, but it wasn't exactly packed. Service was friendly. Piped music was in evidence (Fleetwood Mac, Pink Floyd), but it wasn't annoyingly loud. I had a pint of Leeds Eager Owl (£2.55), and very nice it was too. The other ales on offer were Grand Union bitter (£2.50) and Downton Brewery Black Knight (£2.55).

Kake visited again on a Thursday afternoon in June 2009. Around the same number of customers this time too, conversing about motorbikes with the chap behind the bar. No music, but the TV was on quietly. I had Sambrooks Wandle (£2.60/pint) this time; the other ales were Twickenham Grandstand (£2.60/pint), Blindmans Micro Magic (£2.70/pint), and Slaters Premium (£2.80/pint).

Accessibility: No step to get in (though there is a sort of ridge), and it's step-free to the bar, seating area, and toilets. Not sure about the beer garden.